Often, I feel alone. Not lonely, but alone. A great bit of this is my own fault. I’m a solitary creature, an introverted writer drifting in and out of the space-time continuum. I spend a great deal of time in my head with worlds and people who are very much real, albeit without any physical nature to them. They are, to me, no different at the heart than the people and places I see in this world. Imagination and reality are the same. There’s a comfort to it. Not an escape, but a pleasant dynamic of creation and satisfaction in discovering people and places that inspire me. It allows me to feel more human. More whole. Less alone.

In my everyday world, it’s a different story. I work alone 90% of the time. I’m not much for chatting on the phone. Texting is communication, and I prefer it, but it hardly leaves one feeling accompanied on a journey of any sort. Social media offers an opportunity to connect, to be a part of something, and certainly gives me the daily chance to broaden the Broadleaf community of writers. But, in the end, the world gets quiet, the sound of the fridge running filling the void when the air conditioner doesn’t. Whether on the patio or at the dining room table or sitting at my desk there is an abundance of silence.

Then, I am truly alone.

My only solace during these times, as I have not been so fortunate as to have children, is of the furry four-legged variety. For the past six years, the constant love and attention I’ve received from the ever-present Molly the Cavatese Muppet Dog has given me a healthy dose of what it might be like to have a mini-human in my life. For thirteen years, my cat companion Maggie has been by my side. Through the closing of my bookstore (long live Wordsmiths Books!), to divorce, to break-ups, loss, and moving from one rental property to another. More moves than most cats could endure, I’m sure. Mix those two in with the friend and family member (and mother to the fur babies) that the Moss has become and there is something daily to remind me that I am not entirely alone. They keep me balanced, humored, and moving forward through the worst life has to offer.

But now Maggie is gone. In a flash. Bone cancer took her one week ago. In retrospect, I can see she dealt with it for far longer than I knew. But from diagnosis to the end was a mere ten days. Ten days. The last three of which were filled with dread and horror, sadness and disbelief. I feel cheated. Stunned. Above all, heartbroken. Finding my way through the days that have followed has been challenging, with more breakdowns than I should probably admit.

Some, I know, don’t understand how losing a pet can rival the loss of a human. All I can say (and have said) to those folks is that, aside from believing that all life has equal value, Maggie was never a pet. She was a friend, a confidant (though I’m sure she spilled the beans to Molly far too often), and a loyal and loving companion through my everyday attempts to live. The void that remains is profound. It is intense. I can’t brush my teeth without staring at the spot on the vanity she would perch, tail driting in and out of the sink, not so patiently waiting for her next round of food or treats (and, I like to think, ensuring I wasn’t left alone). She’s not there to keep me company at night, sprawling out on more bed at my shoulder than I should allow. She’s not there in the morning to climb upon my chest, work her claws into my skin as she makes biscuits, and give me a slice of joy to start my day. She’s not there while I work, while I write, while I sit on the patio and take the world in for a few minutes. There’s no chirpy greeting when I come home, no soft tick, tick, tick of claws on the floor as she moves from room to room hunting her next spot to nap.

She’s just not there anymore. And I feel more alone for it.

Grief often carries one into anger. I can’t feel angry about it. Weird though it sounds, I’ve actually tried. She was suffering, in pain, her liver and kidneys failing as the cancer spread, as she quit eating. She’s at peace now, and I can live with that. I’ve quoted Albus Dumbledore more times this week than is reasonably sane, but it speaks to my beliefs on life and death: “Do not pity the dead. Pity the living. And those who live without love.”

As it happens, I’m working on a project now that this experience broadens. About a young boy dealing with the loss of his older brother. I understand the character far more than I did a week ago. Much like him, I would do just about anything to have Maggie here again. To fill that void created by her absence. And to ultimately come to terms with the fact that she’s gone. That life goes on, just differently.

There will never be another Maggie. In the physical world her uniquness lives only in memory, in picture, in video. In the other world within the walls of my mind, in the realm of imagination that houses worlds and people that keep me company, she prowls and talks and sleeps and plays as she did here. She watches over me, fusses when I’m not attentive enough, gives me that whisper of a meow when I wake her up kissing her head, and stays by my side always.

It doesn’t take the hurt away. It doesn’t remove the fact I’ll never be able to pet her, to pick her up and put her over my shoulder, or to watch her sleep by my feet while I write. But it’s something. And, somehow, that will have to do. 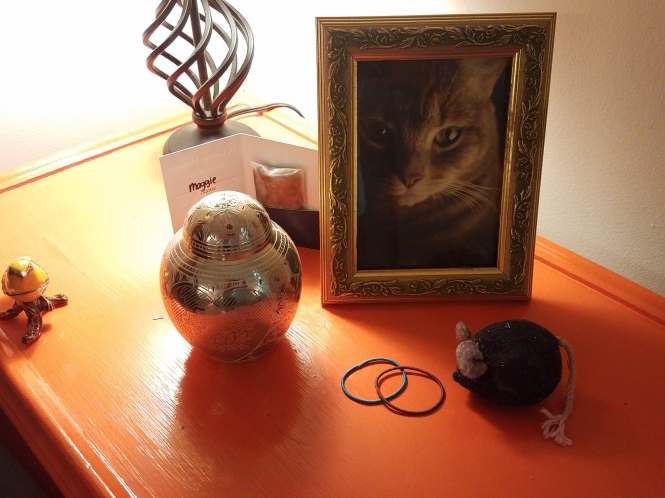 7 thoughts on “The Grief Monster”