The Adventures of an Adventurous Duck

We all want to travel, to see the world unabated, in all its wonder. That’s in your grasp.  You only need to do it.  Ducky Thomas  is no different. Well, except that he’s a duck, which you are not. Hopefully. If so, my apologies. Regardless, he wants to see the world. Problem is, he can’t fly, which leaves him counting on me to carry him everywhere I go. Sometimes, he has adventures. Sometimes, his view of a new locale is restricted to the window of a hotel. Sometimes, devilish duck he can be, he finds his way out on his own, seeking adventure wherever he can find it. I’d be angry about it if he wasn’t so darn cute. Here’s a sample of what Ducky has to offer. The rest you can find on his site, the aptly named The Adventures of Ducky Thomas. 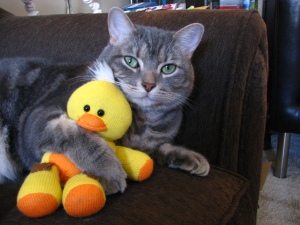 Maggie is the bestest cat in the whole world!  She’s really silly, and likes to play–just like me!–and she’s super pretty!  Sometimes she lets me snuggle up with her to take naps.  And boy does she take a lot of naps!

Maggie doesn’t ever go outside, which she says is just fine with her, thank you.  I don’t know why she doesn’t like being outside.  She sure does spend a lot of time looking out the windows.  But she says it takes so much time to keep clean that there’s just no way she could go outside without losing sleep.  I guess she needs a lot of sleep.  As a duck, I only need 3 hours of sleep a day, so, boy, I think she sleeps as much as I am awake!

Oops. Sorry.  I get a little carried away some times.

Speaking of being outside, I want to tell you about the suhknowee day that I had.  In case you don’t know, sometimes it gets so cold outside that when it rains–which apparently is does waaaaaay up in the sky–the water will freeze and will kris…crista…crystallize!  That’s it!  (Boy, spell check sure does help a duck out!)  That means it turns into ice.  And when it does that, the little icicles will fall to the ground as suhknow.  If enough of it falls, then it sticks to the ground and gets all crunchy to walk in.  I hear that some places get so much suhknow that it would completely cover me.  WOW!  I don’t know if I want to have that happen!  I can’t fly yet.  I don’t know how I would ever get out of that!

Well, guess what?  We had a suhknowee day not too long ago!  I know!  Neato, huh?

Look at all the suhnow!

I know I’m just a little duck, and I sure haven’t done too much in my life, but that was the most fun ever!  There was so much suhknow that my legs were all covered when I walked.  And boy how was it cold!  But it sure is super fun to play in.  You can roll it into balls and make a suhknowman, which is like a person made of suhknow, only it isn’t a person that is alive.  They kind of just sit there and make the same face all day long, and they have sticks for arms and weird black eyes.  Actually, I didn’t go near any of the suhknowmen.  They were kind of scary.

Oh, my. He really is a scary suhknowman.

But the rest of the suhknow was really, really pretty.  Don’t tell Maggie, but I think it was at least as pretty as she is.  Shh!  She’s very sensitive about how pretty she is.  I think that’s why she doesn’t like to go outside.  It would make everything else less pretty.

Well, anyway, you can do all sorts of fun things in suhknow.  Like making snow angels, for example.  It’s really easy.

The first thing you do is find a nice bit of suhknow to lie down in.  I KNOW!  In the suhknow?  It really is cold, but this is a lot of fun, so, like Zach says, “A lot of the really fun things in life aren’t free.”  It doesn’t really cost any money to lie in the suhknow, but I guess it sort of costs you being cold to have fun making a suhknow angel!  It’s totally worth it!

So, anyway, this is how you make a suhknow angel.  First, spread your arms and legs out wide, like this:

It really is very cold! Brrrrrrr!

The next thing you do is the fun part.  You just flap your arms and legs up and down and back forth for a few seconds.  The suhknow will get all over you, but just keep going.  After that, you have to stand up, which isn’t as easy as you might think.  Suhknow if very, very slippery.  Zach tried to help me, but I wanted to do it myself, like a big duck.  It sure wasn’t easy.  I fell down three times! 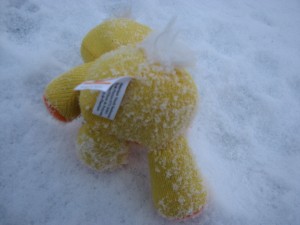 After you get up, you can look down and see your suhknow angel!  Look at mine! 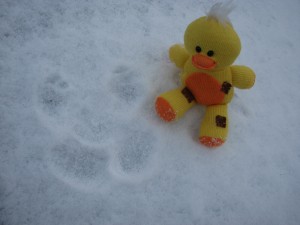 Ducky Thomas is suhknow angel! GET IT?

The only problem with suhknow is that it doesn’t stay on the ground long enough.  You know how ice cubes melt when you take them out of the freezer?  That’s what suhknow does.  It just melts and then everything is all mushy and wet, and I have to agree with Maggie.  It just isn’t fun then.  You get so dirty and have to spend so much time cleaning that it just isn’t fun at all.  Golly though, I sure wish suhknow stayed around longer.  You know why?  Because I get to spend ALL DAY with my family!  Zach, and Katie, and Maggie, and Henrietta, and my newest friend Chester the Bee (I’ll show you picture of him later, he’s super duper cool!).  We’re all home!  All day!  And then when it’s late, and I’m soooooo tired from playing in the suhknow, I get to snuggle up with Maggie and take a nap!

Time for a pre-birthday road trip with @jessdawnwilson to see the #Braves and #RedSox play. I felt bad leaving Winnie, but she seems to be in a good place about it all.