This whole Talking About Wordsmiths thing is at a merciful end. Its intended purpose–to purge the final glistening dew drop from the leaf of my life (whatever that means)–has been fulfilled, as I find myself lacking the desire to post anything further. I’ll drop some pictures with brief captions tomorrow, in an effort to blast the final tidbits of favorable memory into the ether, and to honor those who meant more to my efforts than they might realize, but I think this will be it.

I can think of no better way to finish it.

I previously detailed the launch night of Anointed as one of my favorite nights. Though I must admit to the self-centered affixation to that’s night’s purpose, I can’t deny the book launch portion was but a reason why it was my favorite night. You see, Wordsmiths Books became the ring for a rather entertaining (and, admittedly, one-sided) tug of war. One that carried on like a fifty round bout, no ref in sight to stop the continual beatdown suffered by one of the contestants. Or better, it was like watching a train wreck, plane crash, and hundred-car pile-up, all rolled into one, unable to turn away, unwilling to ask why it must go on in perpetuity. It was mesmerizing.

The Undisputed Featherweight Champion of the Verbal Smackdown.

His opponent, his defensive retorts weighing in at an unprecedented, and immeasurable, Zero G, Russ Marshalek.

Every war has an end. Every skirmish a victor. Every moment, a future defined. On February 22nd, 2009, the verbal spat that was Davich v. Marshalek came to a climactic conclusion, on the stage of Wordsmiths Books, before a captivated audience of 150. It will forever be known (by at least one local, who flings it with regularity every time he sees me) as the day the world paused in reflection, uttering the words “Russ Eat Meat” with nary a clue as to what they meant. 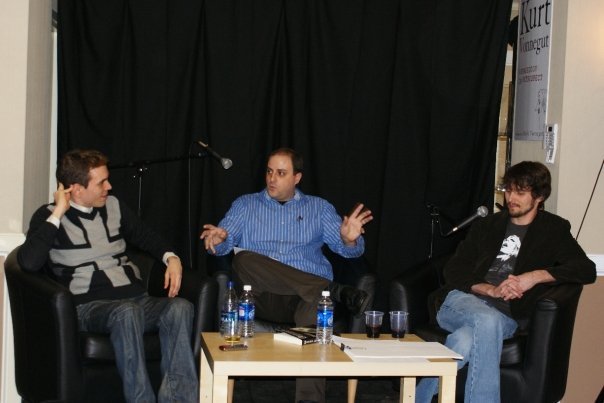 Setting the ground rules only encouraged the wine, and the whine.

Content is unecessary. In fact, ask me to recount the round by round commentary, and I’ll stare at you blankly for a time, finally bringing myself to say only, “Joe won,” with a notable shiver. I don’t remember the punches. I only remember the result.

I can offer for certainty that Russ fought with great resolve, challenging his opponent with cited passages in defense of … well, no idea really. In defense of something.

Joe responded, as only Joe can. 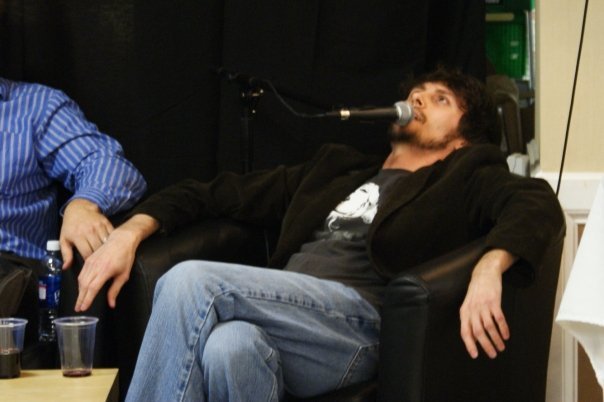 His counter left Russ reeling, coiling into a bottle like an infant to the teet.

At some point, you just have to forgo the glass.

Posters were brandished, slogans were uttered, Marisha Pessl was slandered, people laughed, people cried (out loud as part of laughter perhaps, but still), I was amused, the wine vanished. In the end, the champion stood, proud and victorious, stepping from the stage with a haughty grin, parting the crowd like Queen Elizabeth (for a more detailed description of anything Queen Elizabeth ever did, please see Sir Davich), off to celebrate his long-sought dominion over the defeated Wonderboy. 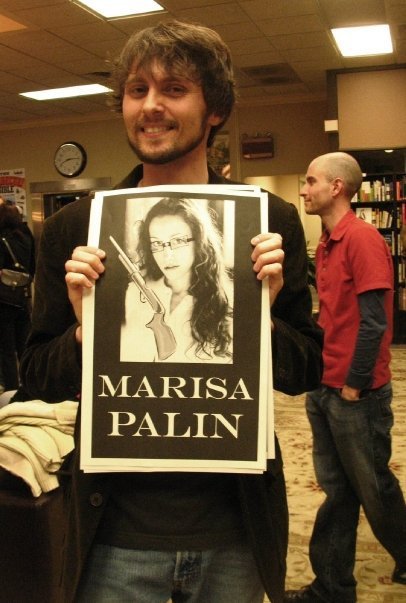 It’s not smug if you’re Joe. Neither is it ever misspelled.

It was a great night. A fitting end to a store that was about more than just selling books. It was a sitcom without cameras, a novel without a writer, an entertaining home without a pug. It took a great deal to organize (actually it just took a customer telling the two of them to put up their Hello Kitty purses and hash it out on stage, which was a glorious moment for all), a tremendous amount of wine, and a propoganda war unlike any ever seen, but it happened nonetheless.