In third grade I liked a girl named Lori. It’s fair to say I thought she was cute, and made me long to fly through the air a la Rudolph if only she would tell me the same. She never did. It isn’t because I wasn’t cute, because, well, I just was. Deal with that. 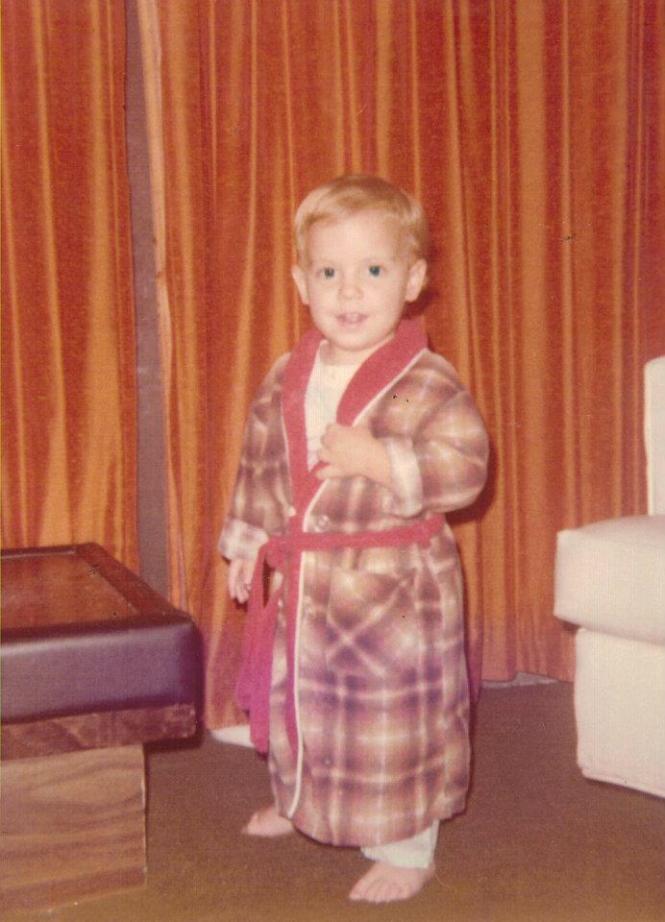 The problem is, she never had the chance. In retrospect, all the “I like you this much” signs were there, but I trembled at the mere thought of talking to her. Eight years old and I was afraid to talk to a girl. Why? I don’t know. I really don’t. Would she have turned into a dragon and devoured me? Maybe. Possible even. Might she have spat acid in my face, turned me into a head-bandaged-wrapped elephant man? Or might she have even been so bold as to do the unthinkable, and talk back? Perhaps want to talk further? EGAD!

I was terrified. And so I never spoke to her. We crossed paths many times on the playground, during recess, in the lunch room, or in the aisle between our desks, but I went stone faced every time she came near, as if I’d tried to stare down Medusa to work up my nerve. On the last day of the year, she asked to sign my shirt (For those of you who have never experienced Sign Your Shirt Day, I’m sorry, but no amount of chocolate will EVER make up for your loss). I have very few clear memories of my childhood, but I remember that moment vividly. I mouthed nothing, blankly handed her my blue marker and turned around quickly, lest she dare sign the front and force me to possibly make eye contact. She signed along the neckline of my white t-shirt. She picked a spot nobody else had signed, wrote slowly and legibly. I like to think there was meaning in that. Perhaps the next year I might have braved a conversation to find out. However, I never would get the chance to embolden myself up to the point of speaking before running madly in the other direction. We moved from Scottsdale back across the country to Florida that summer, and I began fourth grade wondering, for the first time in my life, “What if?” This would not be the last schoolmate named Lori I wish I had spoken to. Nor would it be my last regret.

Before I go on, I should say that this isn’t a lament of one singular moment in my life that might have completely altered the scope of the years that followed. No, this is something much worse.  This is the beginning of a pattern. One that makes no damn sense at all.

In High School, I joined the school paper and took my hand at journalistic prose. Enthralled by the idea of exercising my love for writing, I dove in the deep end, the rambunctious idiot I was. At the back side of the first year, something happened that boggles my mind to this day: I quit. I had written several articles, some which were fun little escapades through the fields of my insanity, and had even received some praise. I covered the football team, which meant I got to be on the sidelines, near the cheerleaders–GAK!–immersed in the atmosphere of hyper-exuberant jockiness. But I quit. Why? Beats the hell out of me. Something within just suggested all of this fun and love and certainty of purpose was just not for me.

Same year. I join the baseball team. (Author’s note((which is a really absurd aside, because isn’t this whole thing just one big author’s note? Idiot.)): There is no adequate reference to how I feel about baseball. Best I can say is this: If you believe in Evolution, and see humanity as this ever-changing creature, from atomic particles to the ultimate source of energy we will eventually disperse into … that.) I had gone through a ridiculously stupid growth spurt. From five foot five to six foot one in six months. I was all arms and legs and leaner than a pole, like some kind of anorexic marionette. I was really good at baseball, though. It consumed me. But that year, for all my talent, I floundered. The coaches saw something in me, despite it all, and begged me to spend more time in the weight room. Maybe they were just concerned a good breeze would lift me away. I don’t know. I smiled, nodded, and never bothered. I just stopped playing. Why? Beats the shit out of me.

I entered my twenties at a dead sprint, the only running I’ve ever done by the way. Afraid to talk to any of the female species, I missed out on countless friendships, dates, conversations, and lest I allow subtlety to ruin everything because my mom is probably reading this, sex. It wasn’t that I was incapable of wooing, I was simply terrified of what would happen if it was received well. WHAT IF SHE WANTS TO SAY MORE THAN JUST HELLO OH DEAR GOD WHAT WILL I DO? So, I avoided it. This led to an overdeveloped sense of marital need, and far too much loneliness to expect rational decisions related to females going forward. Perhaps I believed if I locked one down, I could stop fearing interaction. I don’t know. So I married the first girl who showed me any desire to be with me long-term. We dated three months before we were engaged. One year later, despite my worries I had stepped in a pile that wouldn’t wash off, we got married. It lasted a year and a half. In anything shy of grand style and theatrics, I retreated into myself, proceeded to once again shy away from female contact, and spent the next six years without any emotional connection. Then I met someone else who wanted to connect. Never one to learn from the past, I thought the best thing to do was to repeat the same action and expect an entirely different result.  So, we essentially decided we were getting married that first weekend, and I though that was as cool as a frozen banana in ice cream. Less than four months later, we were. Not a frozen banana in ice cream.  Married. Just to keep things clear. That one lasted an improbable four years, and ended with her insisting I was cheating on her (at one point with my gay friend) and trying to kill her. Of course, she did get engaged two months after our divorce, but that’s neither here nor there, or an apple worth eating.

I have no idea where that apple thing came from.  Sometimes, I tell ya.

The one thing I’ve never given up on: my dream to be a successful author. But I don’t talk about it much. I don’t talk publicly about much of anything. I opened a bookstore did you know–not unless you were there, since I HAVEN’T MENTIONED IT AT ALL ANYWHERE TO ANYONE–which fell during the economic collapse of 2008. Not to say there weren’t other problems.  There were plenty, but if not for that downturn, I still believe it would have survived, even if in some other form. Regardless, when it closed, I didn’t talk much about it. To family, to friends, to my then wife, to my cadre of associations on Facebook. I got quiet. Depressed. Withdrawn. I have two books published, and I tend to shy away from discussing them? Why? Because I don’t like them? Certainly not. If you haven’t read Anointed, well, first of all shame on you. It’s fabulous fun, even if it isn’t the best thing I’ll ever write. It was nominated for the 2010 Sidewise Award for Alternate Fiction, so it isn’t bad. Publishers Weekly liked it, so hey, right? Flutter, my second book was a nice step up in ability and storytelling, but I don’t talk about it. I whine about the silence it received, with that being the only sound I ever make regarding it. Genius. I’ve been working on the Storyteller, an ever-evolving piece of children’s fantasy that–toot toot–is freaking awesome. I’ve had a few near misses (and there it is, I hate that term and yet I wrote it. As punishment to myself, I’m not editing it out. Idiot. Near miss. It makes no sense in any context shy of “Did you see those trains collide? What a near miss that was!”) on publication, got myself worked up in promoting it, then stopped when all momentum on finding it a home dried up. It’s been one year plus and I’ve not made a single public statement about it. I have a Facebook page, so yay me. And though it needed some more work, a slight tweak in direction, there’s been no reason for it.

I had a list of things I was going to troll through in order to demonstrate what I now have come to accept.  Despite my best efforts to convince myself otherwise, I’ve been afraid for the better part of my life. Afraid to choose, afraid to act, afraid to live, afraid to succeed. I don’t know why, I only know that I can’t do it any more.  That ends now. I’m tired of being afraid.

No more fear. From now forward, I am me. Idiot, yes. Afraid to talk to this girl we call Life, no. 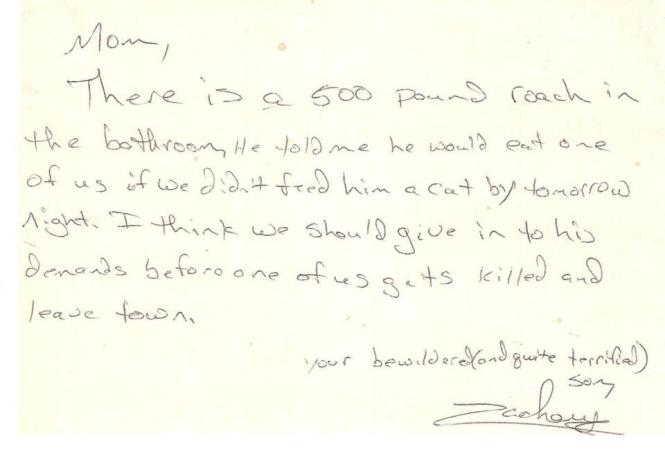 But I am still afraid of 500 lb. roaches. You should be too.